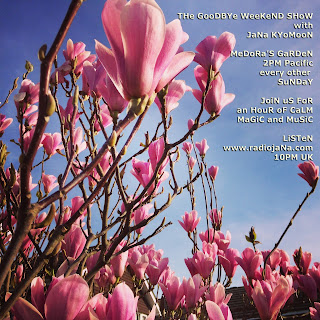 Join us very other Sunday in Medora's Garden and as of this coming Sunday we will be joined by Torben Asp performing his brand of virtual electronica at 1PM - a lovely two hours of music coming up every fortnight http://maps.secondlife.com/secondlife/Heckroth%201/191/52/852
Posted by JaN PuLSFoRD No comments: 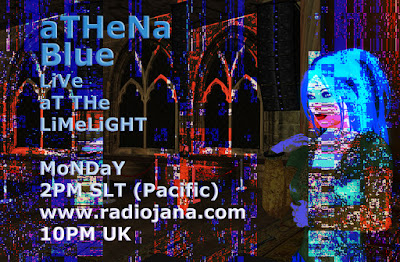 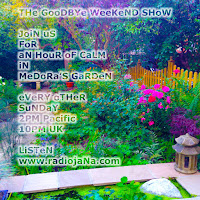 2PM SLT The GoodBYe WeeKeND SHoW - time travel to an hour of calm http://radiojana.com and in Medora's Garden
http://maps.secondlife.com/secondlife/Heckroth%201/191/52/852

Join us for an hour of calm at the GooDBYe WeeKeND SHoW live on www.radiojana.com
Posted by JaN PuLSFoRD No comments: 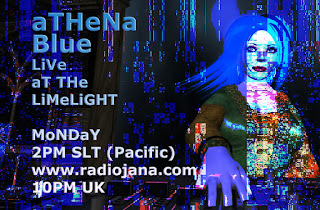 Seems I’ve always been pushing the envelope … often without a stamp and forwarding address :)

aTHeNa BLue was a project in the early 2000s. It was Music for moving imagez - electronica to mix with multi-media.
Compiled with the help of Gary Ford and the extremely kind usage of a painting by Paul Harmon for the image of aTHeNa BLue, the album Return 2 ZeRo mixed DnB with ambient intros tailor made for production music and beyond.
Since then Tracks have been licensed by Jingle Punks and other Music library companies and heard around the world as music behind moving images. As with most background music you might not notice the music but would notice it’s absence.

ReQuieM 4 eLViS & JeSuS came from a performance at the legendary annual
Nashville electronica festival Buzz and Click curated by John Brasil. It was written to reflect the appalling Iraq war death toll made public the week of the festival.
A remix competition of the requiem on Sony Music’s AcidPlanet with Dustin Michael gathered hundreds of remixes and was performed every week until the US from Iraq.

There were also aTHeNa BLue tracks ‘In a Man’s World’ for ‘ Music for Choice” with Dean Capone and aTHeNa’s lurid remix with violinist Peter Hyrka and Yoko Ono’s 'Secret Garden' Mix.
A performance in Atlanta at the 2008 City Skies Festival marked the drawing to a close of those exciting days. aTHeNa got put to bed along with myspace and other casualties of that decade.

Recently Roxy Gellar prised aTHeNa out from her state of suspended animation to perform at the Virtual Limelight Club and thanks to the great reaction is now busy remixing and rebaking the music of aTHeNa BLue.

Listen in on Monday 2PM Pacific time on http://radiojana.com or better still come into Second Life where her avatar spins original remixes and revisits old and new music.
http://maps.secondlife.com/secondlife/Lionheart%20Ahadi/119/216/29

Seems I might have put a return address on the envelope after all!
Posted by JaN PuLSFoRD No comments: